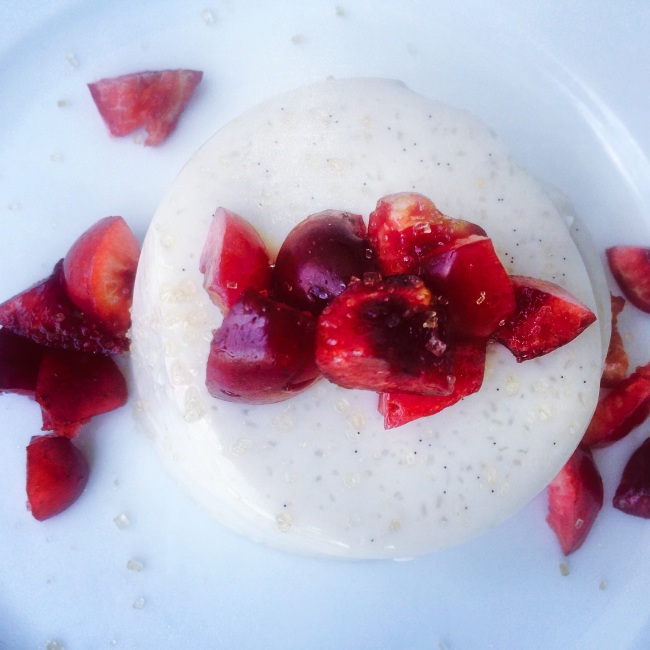 I  ♥  panna cotta. But when I see it on restaurant menus, it’s almost never vegan. Panna cotta is an Italian dessert that’s a cross between jello and pudding. It’s typically made with cow’s milk and gelatin, neither of which are vegan. Gelatin, believe it or not, is made from cow or pig skins, ligaments, tendons and bones boiled in water. Disgusting. YUCK! Who wants to eat that? Not me…ever.

So I made a vegan version of this luscious dessert two ways: (1) with vegan gelatin powder (thanks to a little gift from my friend, Tessa) and (2) with agar agar flakes (a thickener derived from sea vegetables) to take the place of the gross gelatin. I like the agar agar version best, but try them both if you feel like it a decide which one you like. The texture for both is similar. The taste of the vegan gelatin version is a little tangy and the agar agar version is a bit richer.

Both versions involve boiling the coconut milk with vanilla bean for extra flavor. I added maple syrup to one and agave nectar to the other for the sweetener along with some pure vanilla extract.

So, basically, this is a really easy thing to make. And when you un-mold the dessert from the ramekins, it’s impressive looking, too. I also like the idea of serving this in small mason jars for a little dessert on-the-go.

One version I topped with fresh chopped cherries and a sprinkle of Demerara sugar. The other got topped with bourbon-soaked dried tart cherries. You could use freshly squeezed orange juice to make it non-alcoholic. And if you don’t own a cherry pitter, go pick up a cheap one at the store. You are more likely to buy and enjoy fresh cherries with one. One of my very favorite kitchen gadgets…fun for kids too. My boys loved doing this with me when they were little. I think they still like it. 🙂

Combine coconut milk, coconut water, scraped vanilla seeds, remaining vanilla bean and agar agar flakes in a saucepan set over medium high heat. Bring to a boil, reduce the heat and simmer about 5 minutes or until the agar agar is dissolved. Turn off heat and remove vanilla bean.

Add agave nectar and vanilla extract. Pour mixture into 4 ramekins or small mason jars. Refrigerate until set. The panna cotta can be served in the ramekin or you can un-mold it onto a plate. Top with fresh chopped cherries and a sprinkle of coarse Demerara sugar.

Combine dried cherries and bourbon (or orange juice if making non-alcoholic). Let sit at least an hour to allow cherries to soften and plump up a bit. Drain liquid before serving.

Serve in ramekins or un-mold onto a plate. Top with drained cherries.

As a culinary school grad and yoga enthusiast, I am very seriously into eating good healthy food and sharing creative, easy ways to prepare it. When I'm not cooking, I love teaching yoga, talking about yoga, reading about yoga and doing yoga. And I believe the more you live it, the more you find yourself wanting, even craving, clean wholesome food.