Summertime is around the corner and I’m thrilled to start cranking up the grill. Love to throw a bunch of colorful veggies together in a grill basket. Recently, I had a firm avocado and added it to my mixed grill to see what would happen. Oh. My. So awesome. So I got the idea to grill all of the ingredients for guacamole and see what it would be like. 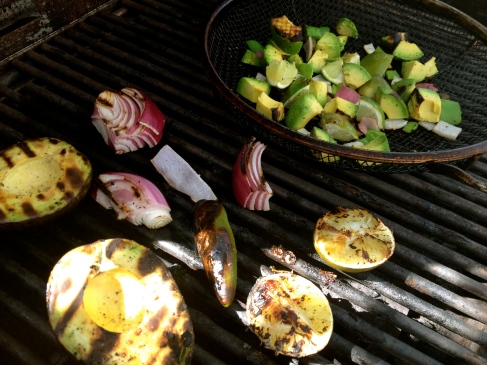 Because I felt like messing around some more. I got out my tortilla press and made homemade corn tortillas and baked them into chips. You could try making chips with store bought tortillas instead. It’s sort of fun and my kids loved them. Or skip it and just buy your favorite chips or chop up some veggies to go with the guac. It’s all good.

Making the tortillas was fun. I followed the recipe on the back of the White Wings corn tortilla mix that I bought. I went with a fine white corn mixture. I had tried a yellow corn masa about a month ago and did not like the texture at all. After pressing the tortillas, I cooked them on a griddle, cut them into wedges and baked them in the oven until they were crisp.

2 limes, cut in half

Heat grill to medium high heat. Drizzle avocado, lime, jalapenos and red onion with a little olive oil and sprinkle with salt and pepper. Place avocado and lime halves cut side down on grill. Add peppers and onions. Grill for about 5 minutes until charred and turn over with tongs. When charred on both sides, remove from grill and let cool.

Scoop flesh from avocado into a medium bowl. Remove skin and seeds from jalapeno, chop and add to avocado. Chop onions into small dice and add to avocado. Squeeze limes over the mixture and add cilantro and agave. Use a potato masher and mix everything together to your desired consistency. Taste and season with salt and pepper. Add a little olive oil if guacamole seems too dry.

Serve with corn tortilla chips and carrot and cucumber sticks.

Note: You may also chop all of the veggies up beforehand and grill them in a grill basket if you would like.

Mix corn harina and water in a large bowl until combined. Adding more water if necessary to have a smooth dough. Cover with a wet paper towel so the mixture does not dry out. Make about 14 2in balls of dough. Place dough ball in between tortilla press that has been covered with a circle of plastic (I cut my from a grocery bag). Place another plastic circle on top and lower press. Carefully remove tortilla to a plate and repeat with remaining dough balls. Cover tortillas with a wet paper towel. (Tortillas can be rolled out with rolling pin if you do not have a press).

Heat cast iron griddle over medium heat. Add about 1 tsp coconut oil to melt. Place tortillas on griddle and cook until lightly browned on both side. About 2 minutes per side. Repeat with remaining tortillas.

To make chips: preheat oven to 325 F. Use a pizza cutter and slice tortillas into six wedges. Coat a sheet tray with cooking spray or a little more coconut oil. Place tortilla wedges on tray without overlapping and sprinkle with salt. Bake about 15-20 minutes until crisp, turning over about half way through cooking time.

As a culinary school grad and yoga enthusiast, I am very seriously into eating good healthy food and sharing creative, easy ways to prepare it. When I'm not cooking, I love teaching yoga, talking about yoga, reading about yoga and doing yoga. And I believe the more you live it, the more you find yourself wanting, even craving, clean wholesome food.